The death of Playboy mogul, Hugh Hefner has resurfaced interesting debates about female exploitation, sexual revolution and shifting social norms. The feminist sex wars (from the mid-1970’s onward) highlighted key differences in the ideologies of leading feminist thinkers, in particular, varying perspectives on pornography and the sex industry. Discourse in relation to Hugh Hefner’s legacy highlights that the ‘liberation’ versus ‘exploitation’ narratives remain contested. Hefner seems decidedly anachronistic, but in expanding debate, can we go further and construct thinking tools to help examine the female role in conflict, statecraft, intelligence and counter-terrorism? Does feminism, as a critical theory, provide a suitably coherent framework to help develop simple and useful analytical lenses?

Feminism’s origins are rooted in the French Revolution and the European Enlightenment of the 18th century. In the late 19th and early 20th century the First Wave of feminism sought legal and political reform through woman’s suffrage. This became a global movement as political reform swept throughout many parts of the western world.

In the early 1960’s the Second Wave of feminism significantly broadened focus and included issues such as marital rape, domestic violence, gender norms, reproductive rights, sexuality, the workplace and the family.

In the early 1990’s the ‘Third Wave’ of feminism focused on individualism, sexuality and race, rejecting some of what it saw as feminist orthodoxy. Its emergence and the resulting impact on Feminist International Relations (IR) is important, coinciding with the end of the Cold War and a reappraisal of traditional approaches (such as the various hues of Realism and Liberalism). The ‘Fourth Wave’ (beginning in 2005) has been characterised by ‘online feminism’ and is clearly contemporaneous with the rise of social media.

The First Wave of Feminism spanned a century. Little more than 15 years separated the beginning of the Third and Fourth Waves. The pace and exponential global expansion of the movement has exacerbated ideological differences, although feminists remain united on a number of core values.

Liberal Feminists seek equal rights with men to participate in all structures of public and private life. In their view, rectification of gender imbalance requires full female inclusion in both high and low politics. They are criticised by Radical Feminists who see the existing structures of high politics as having been moulded in hegemonic masculinity. Radical Feminists believe in reconstructing the ‘status quo’ whereas Liberal Feminists first demand full participation in established socioeconomic and political structures. Marxist Feminists believe that capitalism has perpetuated patriarchy and failed to distribute wealth or power to females. In their view, a socioeconomic revolution is needed before women will have true equality and emancipation.

In contrasting feminism as a critical approach to traditional International Relations theories such as Realism, we see that Realism’s sole focus on security of the state greatly limits its analysis. Proponents hold this up as a virtue on the basis of intellectual coherence and parsimony. Critical approaches (such as feminism) challenge the pre-eminence of Realism in the realities of a post-Cold War world.

Feminism as a critical approach therefore gives us the opportunity to consider women and girls in a variety of roles, from those requiring protection, to those providing protection, to threat actors and predators. Here I derive and adapt a simple model (taking inspiration from an article by Mary Eberstadt and the unrelated, “Analysis and solution of a predator–protector–prey multi-robot system by a high-level reinforcement learning architecture and the adaptive systems theory”) to categorise these roles as “Prey” (needing protection), “Protector” (providing security and defence against the predatory) and “Predator”, the nefarious actor, be they civilian, a sub-state actor (such as a terrorist), and rogue state actors (such as corrupt politicians, police, military or intelligence personnel). These begin to highlight the multiplicity and complexity of the female role in both the prosecution and transformation of conflict (and indeed various aspects of general criminality). 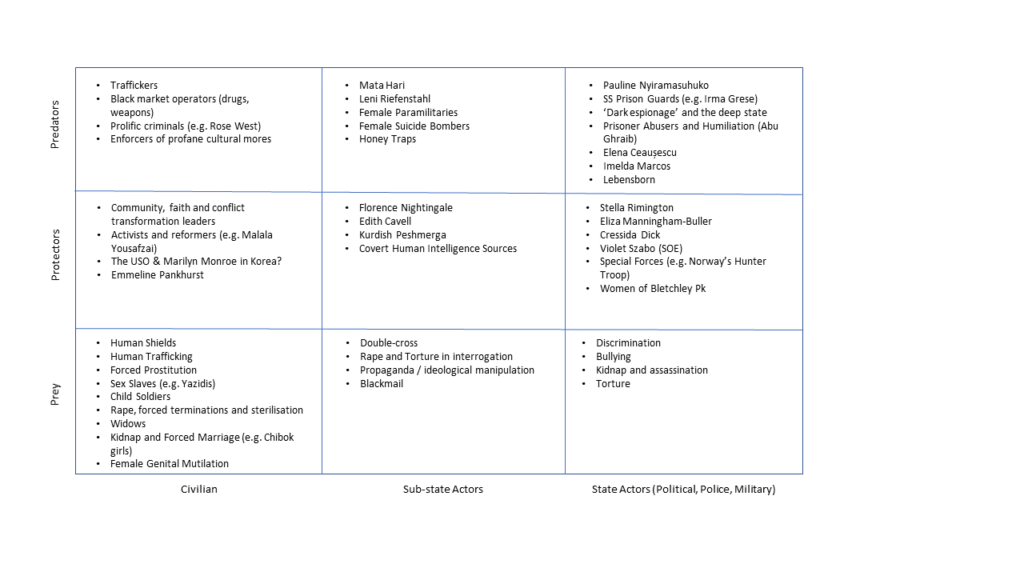 Taking the bottom left quadrant, representing the female civilian victims of conflict and oppression is perhaps the most familiar, particularly in traditional news coverage and ‘war narratives’. From the Chibok girls in Nigeria to the Yazidi’s in Iraq and the rape camps in Bosnia, there are innumerable and horrifying examples of kidnap, forced conversation and marriage, sexual slavery and rape as a weapon of ethnic cleansing. Many more end up as refugees and widows.

If we further consider the role of civilian protector, reformers such as a Malala Yousafzai or an Emmeline Pankhurst add richness to our understanding of female roles in conflict and social transformation. This must of course be off-set by examining predatory civilians and their role in the oppression of civilian, sub-state or state actor ‘prey’. Many examples occur, particularly looking through a criminological lens, such as a Rose West or a Myra Hindley.

I add the sub-state actor category to differentiate between the purely civilian and purely state actor. Nefarious sub-state actors include female terrorists, hostile (freelance) spies (a Mata Hari figure for example), as well as highly controversial figures (such as a Leni Riefenstahl). These can be contrasted with genial sub-state actors, for example an Edith Cavell or a Florence Nightingale could be cited.

The predatory state actor (top right quadrant) provides an interesting lens. Pauline Nyiramasuhoku who was sentenced to life imprisonment for inciting genocidal rape in Rwanda is a notorious example. Elena Ceaușescu was shot along with husband Nicolae after the fall of their regime in Romania. Imelda Marcos was widely vilified for her profligacy in a country racked by poverty. The degree of their guilt contrasted with SS Guards such as Irma Grese, female paramilitaries, female suicide bombers, prisoner abusers (such as Lynndie England at Abu Ghraib prison in Iraq) and operatives who deal in honey traps and sexual lures must be considered.

As examples of state actors operating in protective roles, historically, Stella Rimington and Eliza Manningham-Buller and currently Cressida Dick (Metropolitan Police) and Lynne Owens (National Crime Agency) provide examples. Clearly a multiplicity of female police officers in counter-terrorism, safeguarding and other roles, as well as intelligence service operatives and military personnel must also be considered. It could be argued that in participating within the established structures of the state, that these examples represent Liberal feminist orthodoxy.

Combatant females can of course also fall victim to hostile forces if caught and may be subjected to sexual abuse and humiliation as part of interrogation. Hence, the protector can become prey, as indeed can roles shift up and down the axes of the model.

In the world of high politics and ideological thought where a Margaret Thatcher, Angela Merkel, Condoleezza Rice, Madeline Albright, Hillary Clinton or even Ayn Rand might be situated is likely to spark debate. For example, a strident Marxist Feminist is unlikely to consider Thatcher or Rand as (uncontestably) genial state actors.

This begins to illustrate that feminism provides lenses through which to assess specific threats against women and girls in a broad range of circumstances. Traditional International Relations theories such as Realism as non-gendered, with sole focus on the state, fails to take account of these threats. Feminism challenges us to consider security expansively and to explore the root causes of threats against women and girls and how such threats could be tackled.

Returning to Hugh Hefner, his first edition of Playboy in 1953 featured a centrefold of Marilyn Monroe. Where should we situate Marilyn in the model? Monroe suffered considerably the vicissitudes of life, and no doubt exploited and was exploited. When she visited Korea in 1954 with the United Service Organizations (USO) to entertain troops was this a morale boosting good, or was she exploited by the machinery of the state, or of the Hollywood studios? Today, the concept of sweetheart entertainer certainly seems as dated as Hefner’s ridiculous ‘silk robes and pyjamas.’ But are there contemporary analogues? 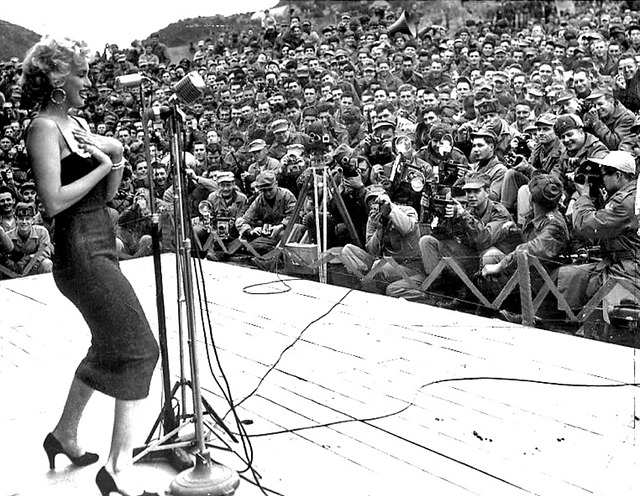 Portrayal of female roles, as an homogeneous defenceless and downtrodden underclass is of course lazy, flawed and pejorative. As demonstrated (in outline), examining roles through alternative critical lenses leads to a clearer and richer understanding of diversity, particularly in the categorisation of ‘the prey’, ‘the protectors’ and ‘the predators.’ The questions of ‘how and why’ a particular individual or group ends up in a predatory role must also be considered. This could be beneficial (taking one example) in developing counter-narratives and examining female perspectives on countering violent extremism and radicalisation leading to terrorism (VERLT).