COGNITIVE DISSONANCE and the inconsistency of belief and action. 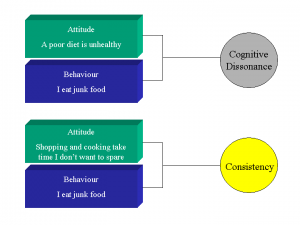 Lateral Thinking: A Textbook of Creativity

A classical illustration of cognitive dissonance is expressed in the fable The Fox and the Grapes by Aesop (ca. 620–564 BCE). In the story, a fox sees some high-hanging grapes and wishes to eat them. When the fox is unable to think of a way to reach them, he decides that the grapes are probably not worth eating, with the justification the grapes probably are not ripe or that they are sour (hence “sour grapes“). This example follows a pattern: one desires something, finds it unattainable, and reduces one’s dissonance by criticizing it. Jon Elster calls this pattern “adaptive preference formation.” [source, Wikipedia]

Problem: Cognitive Dissonance is a term associated with psychologist Leon Festinger. It describes a state of mind where our actions are not consistent with our beliefs.

Context: Why is there sometimes a gap between ‘what we think’ and ‘what we do’? Puzzling irrational and even destructive behaviour can ensue.

Forces: Criticism of what is personally unattainable to reduce dissonance, inconsistency of action and belief, following the crowd, expediency, apathy.

Resulting Context: The danger of Cognitive Dissonance is that is is much easier to make excuses than make changes. This leads people to self-justification and a search for arguments that reinforce their viewpoint. Bad decisions are the likely result as well as denigration of creative approaches that would yield higher long term benefit. In the example from Aesop, the fox never found out if the grapes were ripe or not.

Solution(s): Either change your Attitude or Change your Behaviour. In the example in Figure 1, a state of Consistency is reached when there is a shift in Attitude to recognise the motivation for junk food consumption. A better outcome would be a behavioural shift towards diet change.